“I’m all for sharing, but I recognize the truly great things may not come from that environment.” – Bill Joy (Sun Founder, BSD Unix hacker) commenting on opensource back in 2010.

In March at Google Next’17, Google officially called their cloud offering as ‘Open Cloud’. That prompted me to pen this note and reflect upon the history of Open (System, Source, Cloud) and what are the properties that make them successful.

A little know tidbit in history is that the early opensource effort of modern computing era (1980s to present) was perhaps Sun Microsystems. Back in 1982,  each shipment of the workstation was bundled with a tape of BSD – i.e. modern day version of open source distribution (BSD License?). In many ways much earlier to Linux, Open Source was initiated by Sun and in fact driven by Bill Joy. But Sun is associated with ‘Open Systems’ instead of Open Source. Had the AT&T lawyers not held Sun hostage, the trajectory of Open Source would be completely different i.e. Linux may look different. While Sun and Scott McNealy (open source)  tried to go back to its roots as an open source model, the 2nd attempt did not get rewarded with success (20 years later).

My view on success of any open source model requires the following 3 conditions to make it viable or perhaps as a sustainable, standalone business and distribution model.

Back to Open Systems: Sun early in its life shifted to a marketing message of open systems rather effectively. Publish the APIs, interfaces and specs and compete on implementation. A powerful story telling that resonated with the customer base and to a large extent Sun was all about open systems. Sun used that to take on Apollo and effectively out market and outsell Apollo workstations. The Open Systems mantra was the biggest selling story for Sun through 1980s and 1990s.

In parallel around 1985, Richard Stallman pushed free software and evolution of that model led to the origins of Open Source as a distribution before it became a business model, starting with Linus and thus Linux.  Its ironic that 15+ years after the initial sale of Open systems, Open source via Linux came to impact Sun’s Unix (Solaris).

With Linux – The Open Source era was born (perhaps around 1994 with the first full release of Linux). A number of companies have been formed, notably RedHat that exploited and by far the largest and longest viable standalone open source company as well. 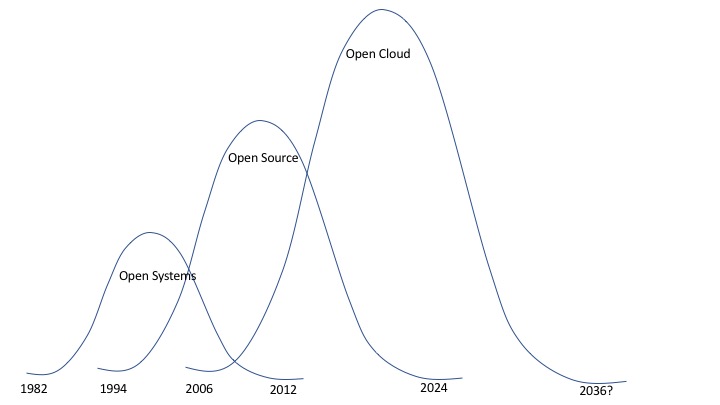 The open systems in the modern era  perhaps began with Sun in 1982 and perhaps continued for 20 odd years with Open Source becoming a distribution and business model between 1995 and 2015 but will continue for another decade. 20 years later, we see the emergence of ‘open cloud’ or at-least the marketing term from Google.

In the past 20 years of the existence of Open Source, it has followed the classical bell curve of interest, adoption, hype, exuberance, disillusionment and beginning of decline. There is no hard data to assert Open Source is in decline, but its obvious based on simple analyses that with the emergence of the cloud (AWS, Azure and  Google), the consumption model of Open Source infrastructure software has changed. The big three in cloud have effectively killed the model as the consumption and distribution model of infrastructure technologies is rapidly changing. There are few open source products that are in vogue today that has reasonable traction, but struggling to find a viable standalone business model are elastic , SPARK (Data Bricks), Open Stack (Mirantis, SUSE, RHAT), Cassandra (Data Stax) ,  amongst others. Success requires all three conditions- Ubiquity, Governance and Support.

The Open Source model for infrastructure is effectively in decline when you talk to the venture community. While that was THE model until perhaps 2016, Open Source has been the ‘in thing’, the decline is accelerating with the emergence of public cloud consumption model.

Quoting Bill (circa 2010) – says a lot about the viability of open source model – “The Open Source theorem says that if you give away source code, innovation will occur. Certainly, Unix was done this way. With Netscape and Linux we’ve seen this phenomenon become even bigger. However, the corollary states that the innovation will occur elsewhere. No matter how many people you hire. So the only way to get close to the state of the art is to give the people who are going to be doing the innovative things the means to do it. That’s why we had built-in source code with Unix. Open source is tapping the energy that’s out there”.  The smart people now work at one of the big three (AWS, Azure and Google) and that is adding to the problems for both innovation and consumption of open source.

That brings to Open Cloud – what is it? While  Google announced they are the open cloud – what does that mean? Does that mean Google is going to open source all the technologies it uses in its cloud? Does that mean its going to expose the APIs and enable one to move any application from GCP to AWS or Azure seamlessly i.e .compete on the implementation? It certainly has done a few things. Open Sourced Kubernetes. It has opened up Tensor flow (ML framework). But the term open cloud is not clear. Certainly the marketing message of ‘open cloud’ is out there. Like Yin and Yang, for every successful ‘closed’ platform, there has been a successful ‘open’ platform.  If there is an open cloud, what is a closed cloud. The what and who needs to be defined and clarified in the coming years. From Google we have seen a number of ideas and technologies that eventually has ended up as open source projects. From AWS we see a number of services becoming de-facto standard (much like the Open Systems thesis – S3 to name one).

Kubernetes is the most recent ubiquitous open source software that seems to be well supported. Its still missing the ‘benevolent dictator’ – personality like Bill Joy or Richard Stallman or Linus Torvalds to drive its direction. Perhaps its ‘Google’ not a single person?  Using  the same criteria above  – Open Stack has the challenge of missing that ‘benevolent dictator’. Extending beyond Kubernetes, it will be interesting to see the evolution and adoption of containers+kubernetes vs the evolution of new computing frameworks like Lamda (functions etc). Is it time to consider an ‘open’ version of Lambda.

Regardless of all of these framework and API debates and open vs closed –  one observation:

Is Open Cloud really ‘Open Data’ as Data is the new oil that drives the whole new category of computing in the cloud. Algorithms and APIs will eventually open up. But Data can remain ‘closed’ and that remains a key value especially in the emerging ML/DL space.

On Oct 28th, IBM announced acquisition of RedHat. This marks the end of open source as we know today. Open Source will thrive, but not in the form of a large standalone business.